How did Fudge become the “official” Up North treat?

How did Fudge become the “official” Up North treat?

Ever wonder how Fudge became a staple Up North?

Just like Atlantic City is known for Saltwater Taffy, Northern Michigan is known for Fudge and a lot of it! Walk down any Up North main street and you will find a store selling creamy and delicious Fudge.

In the late 18th century, fudge was a verb meaning “to fit together or adjust [clumsily].” Around 1800, the word was used to mean a hoax or cheat. By mid-century, the use of the term “Oh, fudge!” as a kid-friendly expletive and was often used when something had been messed up. It’s believed that the first batch of fudge was created when someone was trying to make caramels in the 1880’s in Baltimore and “fudged” up. The name stuck.

So how did fudge become the must have treat for both visitors and residents of Up North? It all started on Mackinac Island when father and son Henry and Jerome “Rome” Murdick were hired to create canvas awnings for the new Grand Hotel on Mackinac Island. They opened the island’s first candy store called Murdick’s Candy Kitchen in 1887, using Rome’s mother Sara’s family recipes from Germany. While Henry continued to make sails in the back of the building while Rome crafted candy in the front of the store using a marble table and giving demonstrations to visitors on how the fudge was made. Visitors and residents loved watching the fudge being made and flocked to watch and of course always left the store with a sweet treat.

Fudge-making soon became a public event and emerging competitors demonstrated their craft, mixing ingredients in a kettle and using wooden paddles to stir them. The more skilled fudge men would really put on a show mesmerizing visitor with their theatrics. Some would allow the gooey mess to nearly ooze off the side of the marble table and then at the last-minute sweep along the edge with his long-handled trowel and fold the mouth-watering candy back to the center of the table. Many shop owners would use electric fans to send the aroma of chocolate out onto the street tempting passersby into their store and they would usually walk out with some fudge.

Today it is not just a Mackinac Island treat offering just chocolate or chocolate with nuts. From Manistee to Cheboygan, Charlevoix to Gaylord fudge shops dot the Up North Landscape with different flavors and varieties. Because of the stability of fudge, Up North fudge is shipped all over the world and airtight packages can be frozen and stored up to a year without losing any flavor. So, give in to the temptation and buy a larger chunk next time you walk into one of Up North’s fudge shops. 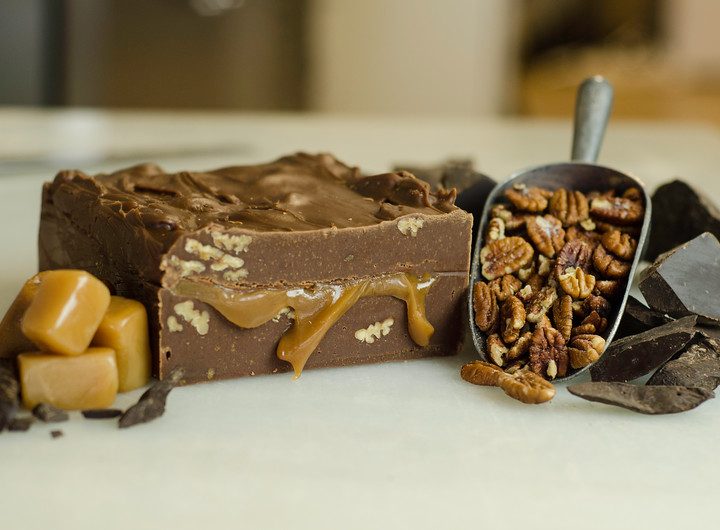 By Up North Entertainment

Not a member? Register here

For faster login connect with your Social Network

You don't have permission to register